With a generally creative childhood, GCSEs in both Art and Graphics, A-Levels in Art & Textiles not to mention an Art Foundation and BA Hons in Textile Crafts you’d think there wouldn’t be many art techniques I’d yet to try. You’d be wrong!

Each month Kim of Darn It Workshops runs two sessions at Crafty HQ for Tea & Tarts WI (of which we’re both members) and the general public. As well as hosting, I get stuck in! Each month I’ll show you how you can teach an old dog new tricks! 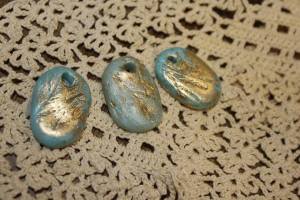 The most recent workshop was Polymer Clay Pendants & Beads, and while it’s something I have had a go at once before at a previous Darn It Workshops session, it was before I was blogging! As usual Kim had some example pieces showing a range of polymer clay pendants she’d made with various techniques such as brushing on gold powder or imprinting with various objects.

Polymer Clay is pretty easy to work with, once you’ve softened it up, it’s just like play-doh except once you’re happy with the design you’ve come up with you pop it in the oven and it hardens so you can keep it forever! 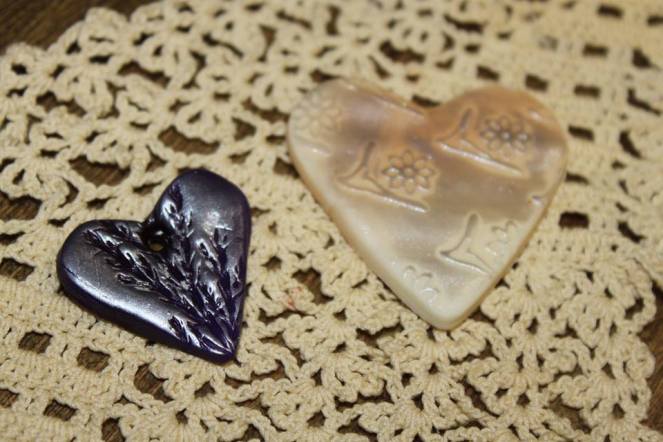 We had a selection of cutters at our disposal, which could be used to cut out more intricate shapes or some people chose to free cut. There was also a selection of letter stamps, other stamps and even textured rolling pins, which could be used to add words or texture to the pieces. Lace or leaves could also be used to add texture before brushing on gold or silver powder to help make the imprints stand out, though  you didn’t have to.

As usual everyone ended up with completely different things to take home and as Kim had a nifty little portable oven powered by tea lights some of us were even able to bake our creations on the night!

The participants made a range of flat pieces which could be used as brooches or pendants (with the addition of a hole) other people made a selection of beads which they could then use to make jewellery either at home or a future workshop!

I chose to make a selection of mushrooms (as you do) which I formed in 3D before adding some wire up the stems so I could use them as decoration in a terrarium I had made at a previous WI workshop with S2R Create Space. 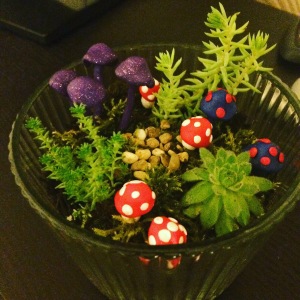 Once I got home I baked my mushrooms (as there were so many people we didn’t all get chance to bake them during the session) and I added them to my terrarium. (it might be mushroom overkill but I’m pleased with the result – especially the purple glittery ones which look much more glittery since being baked!)

As well as hosting the workshop, I provide tea and coffee as well as a

delicious home baked cake to keep our energy levels up! As Kim and many participants are vegan I’ve started to expand my baking repertoire to include a selection of vegan friendly treats. This time I baked a lovely vegan raspberry sponge cake with raspberry icing (pictured on the right before icing had been applied!)

I have always enjoyed baking and the workshops give me an excuse to do it on a more regular basis, while not having to eat a whole cake myself! I have also enjoyed experimenting with vegan cakes. I’ve done a few simple ones now, including brownies and a lemon drizzle but this latest one called for a bit of chemistry, mixing vinegar with soy milk to curdle (which sounds horrid but I assure you it was lovely!). My other half is also thrilled I’m baking more frequently as if there is any left he gets to eat it too!

The workshop was attended by many different ladies – each with a varying degree of crafty knowledge – but we all went home with something to be proud of! You can see more photographs of the session here on Darn it Workshop’s Facebook page.

If you’re interested in learning a new skill, why not pop along to a workshop at Crafty HQ? You can find out about future events by subscribing on Facebook. I’d love to get crafty with you soon!